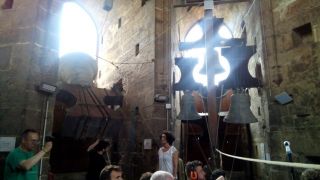 Bell ringing has been a common practice for much of recorded history. The music of bells has been a shared code and language known by communities and used to build time and space.

One of the principal functions of bell ringing involves the construction of time—both social and common time as well as religious time.1 Religious and nonreligious bell ringing together constitute one of the most useful means of communication ever devised. Communities have also rung bells to protect themselves.

The variety of techniques used to ring bells is almost unlimited, as every tower or every town or at least every city had its own, local way of ringing. The language of bells is thus an almost infinite sequence of local codes, rich and diverse. Bells are a musical instrument for expressing feelings of joy, mourning, alarm, and keeping the community aware.

This traditional cultural expression is still alive in some communities, although many have allowed the practice to disappear. In some cases, the ever creative and ephemeral works of the bell ringers have been substituted by engines and electric mechanisms that cannot reproduce the original scores and hamper manual ringing.

Bell ringing, which is an example of intangible cultural heritage (ICH) is an ancient tradition deserving of recovery and preservation. The present article reports on a case study that took place in València, where, after a 40-year absence, bells are again rung by the community and a new model has been developed for managing the tangible and intangible issues associated with this cultural practice.

This study case of the “Campaners de la Catedral de València” (Bell Ringers of València’s Cathedral) (Fig. 1) is based in part on the author’s experience with a longterm project involving the new bell-ringing movement.

Since 2002 I have been part of the bell-ringing team as well as an active participant managing some issues of the team. Participation as a bell ringer led me to direct my professional career toward ICH, including the bellringing tradition, its spread, conservation, and education.

The analysis of this cultural expression is based in anthropology, sociology, history, and geography, because to explore and understand the historical importance of bell ringing, all of these disciplines must be joined. By comparing existing studies that relate these approaches to bell ringing, a complete research frame can be defined.

Significant work in this area has already been completed by Francesc Llop i Bayo, whose essays explore the anthropological aspects of bell ringing, bell restoration, the intangible perspective of bell ringing, and the community implications of bell ringing for cultural heritage. Llop i Bayo has been one of the forefathers of bell-ringing research and study and, more important, about its spread in society.

Since we are presenting a new way of managing this heritage, we are also studying it from a social perspective. How is society interacting with this heritage? How are people taking part in conservations about it and furthering its transmission to future generations?

Fieldwork at the local, national, and European levels also informs the analysis by collecting examples of the various ways communities are preserving their bell-ringing heritage.

Since the 1960s, two processes have significantly affected bell ringing. During the 1960s and 1970s, in response to a “false” modernity, many bell-ringing traditions were lost.

Local music and techniques were forgotten. Traditions were thought to be blocking progress and societal advancement.2 In addition, religious ceremonies were simplified, leading to a considerable reduction in bell ringing.3

Then, during the 1980s and 1990s, forgotten or nearly lost traditions were labelled “heritage” so they could be appraised and preserved.4 One such tradition was bell ringing in València and its surroundings.

This important shift, which helped people “see” bell ringing as something worthy of keeping, inspired a group of passionate volunteers to start ringing bells manually again in the city, first in a small tower and later in the cathedral’s tower.

Once they had climbed the tower for the first time, the process of formalizing the group began and an annual calendar of ringing was settled. The group has been ringing bells in València since 1988.

The group is a nonprofit cultural organization run by a four-to-five-person management team elected by all members. Any interested person can join the group. From the beginning, several experts in heritage and bell ringing have had important roles, including Llop i Bayo, who is currently the president of the organization.

Besides ringing the annual calendar in La Torre del Micalet (the cathedral’s tower; see Fig. 02), the other main goals of the group are to know, use, keep, and spread the tangible and intangible elements of bell-ringing heritage through the study, research, conservation, and restoration of bells and their original sound. Thus, the group is more than just a collection of volunteers who share an interest in ringing bells. The group’s members are committed to taking care of this cultural heritage in a professional (unpaid) manner.

The existence of this cultural movement has attracted the attention of the public institutions that oversee cultural heritage management. In a “bottom up” approach, the management of the city’s bell-ringing heritage is now a collaborative effort between the institutions and the citizen volunteers.

Cultural departments of local and regional governments now set policies for the restoration and conservation of bells according to the new methodologies and respectful techniques introduced by expert research, including by members of the València bell-ringing group.

The model is even being “exported” to other regional, national, and international communities that are beginning to preserve their local traditions.

Shared management should be interpreted as a success both for the group and for society.

The bell ringers of València have set out on a hopeful, positive path to keep alive a historic tradition. The model they have established, based on citizen participation in cooperation with cultural agents, could be an effective tool for the management of ICH, since bell ringing is not the only cultural expression in need of solutions for protection and conservation.

Thanks to all members of “Campaners de la Catedral de València,” colleagues and friends. Special thanks to Francesc Llop i Bayo, who is always helping.

Eliseo Martínez Roig has a degree in English studies and a master’s in cultural heritage management. His research focuses on intangible cultural heritage, especially bell ringing, its education, and conservation. He participates in congresses, publishes papers and monographs, and coordinates bell restorations. He is also in charge of the bell-ringing heritage project “Europe Is Ringing!”